We’ve all been there. Seattle rush hour. Sitting in traffic. It’s bumper to bumper, and a person in on-coming traffic wants to make a left in front of your car. So, you decide to be nice. You’re a Seattleite, right?! You don’t move forward in traffic when the car in front of you does, which opens a path for the person wanting to make a left across two lanes of on-coming traffic. You wave to the person to let her/him know s/he can cross in front of you. However, there is a car traveling in the lane to your right. The driver making the left doesn’t see the car, turns in front of it, and gets t-boned. Don’t be surprised if you end up getting sued for waiving them through! 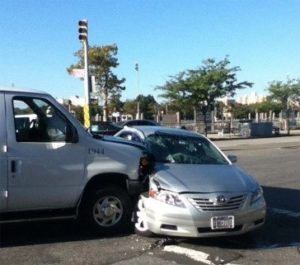 Before continuing, defining legal jargon is in order. In these circumstances, the driver turning left is called the “disfavored” driver, and the driving in on-coming traffic is the “favored” driver, meaning that driver has the right of way. Under Washington law, the disfavored driver always has the duty to yield to oncoming traffic. No law or legal case so far in Washington has created a basis to claim that a third party (the ‘waving’ driver) has a duty to stop or prevent disfavored drivers from turning in front of them and into oncoming traffic. In other words, there is no legal basis for the negligent, disfavored driver who makes a left turn in front of an oncoming vehicle to claim the driver who waved him or her through was partly responsible.

That, of course, does not mean that the disfavored driver’s attorney will not try to raise such a defense. If that happens, you will be forced to defend yourself. And even though the law is on your side, being sued is incredibly stressful. Sadly, the best policy is to be rude and not wave through drivers at clogged intersections who are trying to make left turns into oncoming traffic. It may not be the Seattleite way, but it is the most practical and safest solution.